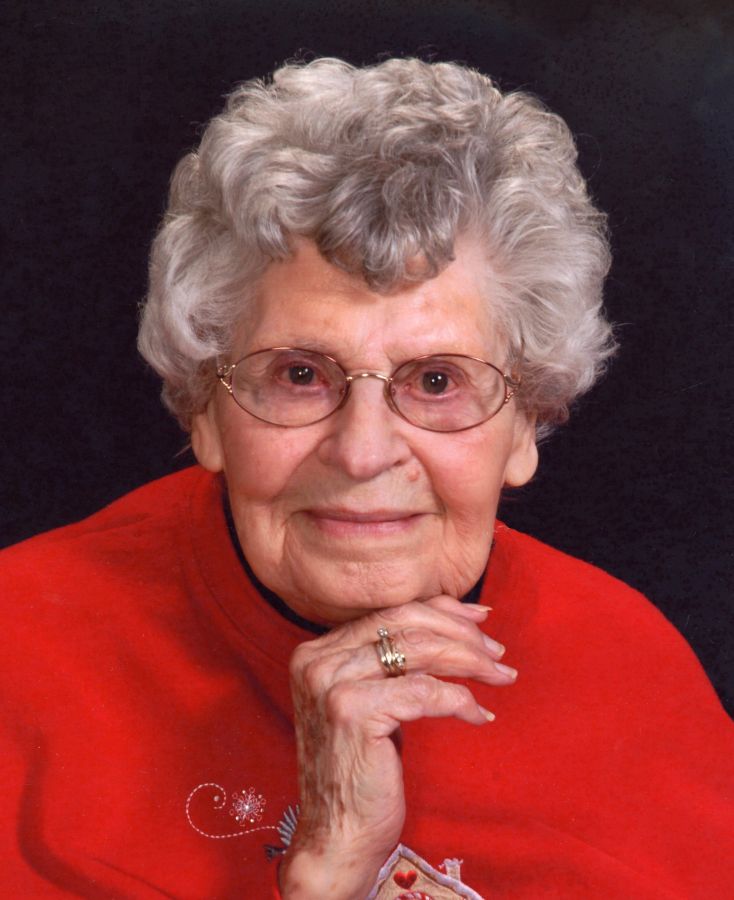 Esther June Boomgarden Schmidt, 97, of Allison, Iowa, passed away Tuesday, November 5, 2019, at the Rehabilitation Center of Allison. She was born on June 27, 1922, in Greene, to Otto and Marie (Endelman) Brocka. Esther was baptized on August 17, 1922, in Clarksville. She was educated through the eighth grade and then received her GED at age 50 from Hawkeye.

Esther married Pete Boomgarden on September 1, 1943, at St. John's Lutheran Church - Vilmar. To this union five children were born; Jeff, Robert, RaeAnn, David and Mari. They lived on a farm west of Vilmar and were never without work or chores to do. While Pete served in the military, Esther lived with her folks on the farm. She spent hours milking cows by hand and helping her dad with the pigs, all while raising their five children. Esther also worked in a factory for a while, making clothing for the soldiers and used one of the first ever electric sewing machines. Pete passed away on February 21, 1971. She then married Paul Schmidt on March 27, 1981, at St. James Lutheran Church; he also preceded her in death in 2007. In her later years, Esther worked for Allison-Bristow Schools in the kitchen.

Esther was a member of St. James Lutheran Church in Allison. She enjoyed fishing, crocheting and quilting, making quilts for every person in her family. Esther loved her family and never missed an activity or event they had. She loved her Lord and helped pass that love to her family as a loving wife, mother and grandmother.

What a wonderful lady...reflecting on the good times I had as a child getting to stay with the Boomgardens for the week of the county fair. The activities the boys of the family came up with on their own and the hospitality the whole family showed me while I stayed...memories I often reflect back on. Conversations I had with Esther about the lineage of the family always amazed me of how her memory was so good. Sorry I could not make it up to Iowa for the service but our thoughts and prayers are with the whole family. Greg Brocka

I have great memories of Esther working at school and at church. & that was a day or two ago. My sympathy to all of the family; I know she will always be missed.

We were so fortunate to have been able to visit with Esther out @ the rehab center when we took flowers out there from Zach’s funeral. She was a lovely, sweet, & kind woman. Thoughts & prayers to her family.

So sorry to the entire family for your loss. Esther was always so nice to everyone she came in contact with at RCOA. She would never keep any of the money she would win at Penny Pitch activity but would tell us to save it and buy more candy for the Halloween Trick - Treats kids!!! She was the queen of bowling also during activities, and would always shoot to get a "turkey", which she frequently did. Her place at our table is rather empty but we have wonderful memories to fill the space. Deepesty sypathy--Kelly Thorne

She was a sweet, loving, and generous lady. She will be missed. Prayers to the family.

Esther was such a sweet lady! She always had a smile and had a wonderful sense of humor. My thoughts and prayers to her family and friends.

Rest In Peace Esther. You will be missed by manny. Blessings and comfort to the family. Loved it when Esther worked at the school in the cafeteria. She always made sure we had enough to eat

The attached photos are added to the memorial of Esther June Boomgarden Schmidt to help share their legacy.

Thank you for sharing your memory of Esther