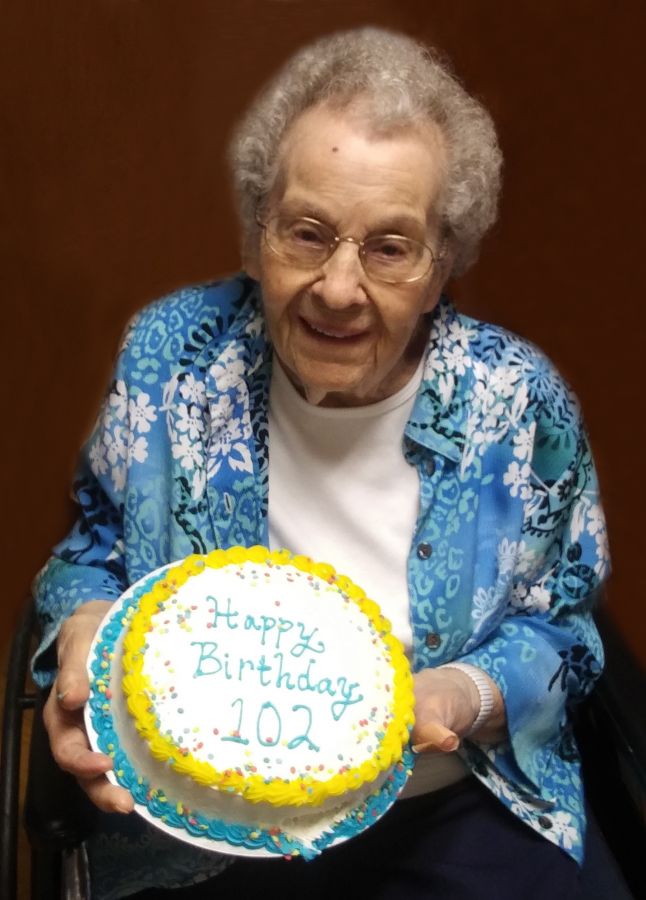 Due to the Covid-19 pandemic, a private family graveside service will be held at St. Paul's Lutheran Church Cemetery in Latimer.

Carlotta W. Rodemeyer, 102, of Hampton, formerly of Latimer, passed away Thursday, September 3, 2020, at Franklin Country View Nursing Facility in Hampton, with family by her side. She was born February 24, 1918, to Ira C. and Gertie (Walker) Brown in Van Wert, Iowa.

Carlotta attended grade school in Van Wert and graduated from Belmond High School with the class of 1935. After high school, she worked at Kinsley Grocery in Belmond. She then moved to Hampton and worked at Harrison Inc. until she was united in marriage to Richard Rodemeyer Jr. on March 30, 1939, by Rev. Geo A. Koch of Trinity Lutheran Church. They farmed most of their life where Carlotta was a farm wife that worked alongside Richard. She was an active member of CAL Over 60's, a Senior Citizen board member and was involved in the quilting group at church. Carlotta enjoyed baking, canning, gardening and spending time with her family, grandchildren, great grandchildren and friends.

Memorial contributions may be sent to Carlotta's family and mailed to PO Box 403, Hampton, Iowa 50441.

She left you beautiful memories, her love is still your guide, and although you cannot see her .........she's be by your side. A life well lived. Your in my thoughts. NJM

So sorry to hear of her passing. Heaven just gained a very special angel. I have so many fond memories of Carlotta. Tess Wieck

I also remember her so vividly at Kolb Hardware mixing up paint and so many other duties there. What a dear person. When I filled in at NF the last couple of months her fondest wish was to be with her family again. Covid was hard and so glad that they were with her at the end. Sympathy to everyone in her family. She lived a long and full life. Sharon Parks

I have many found memories of this wonderful woman. Carlotta was at the nursing home when I started and when I left. We would talk daily about the old times and the old ways. "Your an old soul" she would say to me. I learned a lot from this woman. I would find myself losing track of time getting lost in the old days with her. Telling me of the good times and having a laugh or telling me of not so good times and sharing a tear. I came to love this woman. Thanks Carlotta for being a friend, a mentor and one of the last of the best generation there was and ever will be. Heaven, you gained a beautiful soul. Forever in my thoughts. -- Heather Buseman

Steph,
I'm sorry to read about the passing of your grandma.
May God wrap His loving arms around you. Your loved one couldn't have gone to any better place. Lean on the Lord for comfort.
Peace be with you 🙏,
Deb Lindley

Dear Rodemeyer family, My heart is so sad since I just read that our dear Carlotta has left us. She was so special to me, and I have so missed being able to see her the past few months. My deepest sympathy to you all. Elaine

Your mom was one of the sweetest ladies! I always saw her smiling while at the care center. I know you'll miss her!!

Your mom was such a sweet, loving lady. Always smiling and kind. I remember when she worked at Kolb Hardware, I'd go into the store and she was always dusting. She will be missed by all that knew her. Heaven has gained a lovely angel. God's blessings! Love, Tim and Joyce

What a wonderful loving lady. She will be greatly missed.

Arlyn and I want to let you know we are thinking of you at this time. Carla you was a lucky gal to have your mother for so long she must have been a strong woman 😊 102 what a wonderful life this woman had 😊 love arlyn Vicki miller

Dear Carla, Mike, Ginger and Candice,
Deb and I send our condolences for the loss of your ma and grandma. She was a great lady.
Rick and Deb

She was a very special lady. She loved her family. May she Rest In Peace. Gods blessings.

Due to the Covid-19 pandemic, a private family graveside service will be held at St. Paul’s Lutheran Church Cemetery in Latimer.
Directions  Add to Calendar
Send Flowers Send Flowers to PRIVATE GRAVESIDE SERVICE

The attached photos are added to the memorial of Carlotta W. Rodemeyer to help share their legacy.

Thank you for sharing your memory of Carlotta