Richard Norman Zulauf, 87, of Leesburg, Florida, formerly of Latimer, Iowa, passed away Friday, October 16, 2020, in Leesburg, Florida. Richard was born on May 2, 1933, in Rockford, Illinois, to Norman and Florence (Bauer) Zulauf.

Richard graduated from Southwest High School and Elmhurst College and received his Master's in Divinity at Eden Seminary.

Richard was united in marriage to Anne Gruber on December 26, 1981, in Des Moines.

Richard was a faithful pastor, preacher and friend for 39 ½ years with the United Church of Christ, pastoring at various churches in Indiana, Texas, Illinois and Iowa. In 1997, Richard retired from the ministry, while at Immanuel United Church of Christ in Latimer. He and Anne moved to Leesburg, Florida, where they made their home. He was a past Paul Harris Rotarian, hospital volunteer, Dream Foundation volunteer, and was an avid golfer.

Oct
Friday
Immanuel United Church of Christ
204 East South St.
Latimer, Iowa 50452
Those in attendance will be required to wear a mask.
10:00 AM - 11:00 AM
Text Directions  Email Directions  Add to Calendar

Oct
Friday
Immanuel United Church of Christ
204 East South St.
Latimer, Iowa 50452
Those in attendance will be required to wear a mask.
11:00 AM
Text Directions  Email Directions  Add to Calendar

Pastor Zulauf was wonderful Christian and Pastor. He married my wife and I in 1987 and we both still fondly remember his pre-marital counseling, and although we were young and somewhat hesitant listeners, we learned so much from his discussions with us.
Blessing to your family
David & Katie Mitchell
Freeburg IL

One of the best Pastors and Teachers I ever had the good fortune to learn from. Our two years of Field Education (from Eden Seminary) spent at St. Paul UCC, Freeburg, with Richard and Anne were incredibly fun, faithful, ministry shaping and congregationally grounding as any person or family could have prayed for along the way. Dick always had time to talk, to reflect, to guide, to see the lighter side of things, to translate the harder moments in Resurrection Hope and to be that steady hand in ministry. Anne and he were a duo, a team, who continuously gave God the glory on the journey. I am so ever grateful to God for the life, ministry and example of Rev. Richard N. Zulauf, child of God, disciple of Christ and, now, a member of the Church Eternal. He will forever be in my heart, even as he continues to guide and influence my ministry today, some 30+ years later. Such a Gift of God.
Blessings of Comfort and Peace be with the entire family. Thank you for sharing Richard with the world.
Rev. Dr. Donald & Nancy Wagner and family 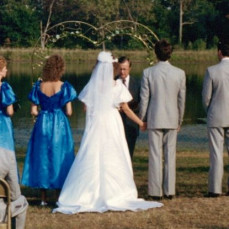 The attached photos are added to the memorial of Richard Norman Zulauf to help share their legacy.